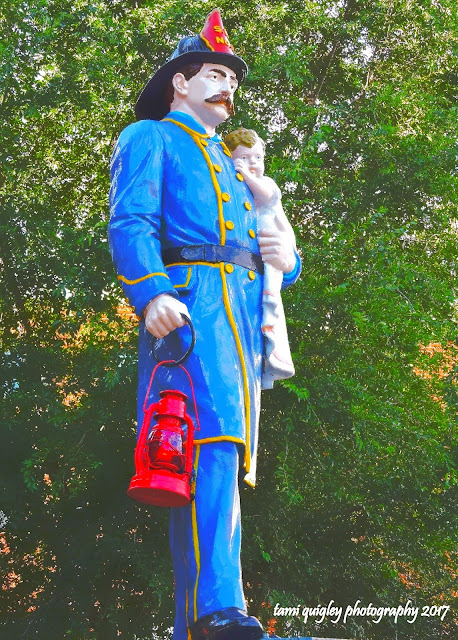 “When you walk through the fire, you will not be burned;
the flames will not set you ablaze.
For I am the LORD your God.”
~ Isaiah 43: 2-3

The Firemen’s Drinking Fountain stands prominently at “Firemen’s Curve” in the heart of downtown Slatington, Pennsylvania on a September afternoon, just has it has for more than a century.

Members of Slatington’s Hose Company #1 dedicated this 12 foot firemen’s monument in 1910. Manufactured by the J.W. Fiske Iron Works New York, N.Y., the fireman holding a child was chosen as a symbol of service, vigilance and humanity. E.T. Barnum Co., Detroit, Michigan, manufactured the fountain to provide water for man and beast. Standing as a living memorial to all volunteer firemen, the statue is a tribute to the heroes who stand ready to serve, at any hour, in any type of weather, and without pay.

When the statue was badly damaged by a car in 1979, the community rallied to raise money for its restoration; it was rededicated in 1980.

The statue was recently refurbished, including electricity connected to the lantern, water hooked up to the fountain, and a black sponge-painted effect put on the base. It was rededicated during a September 11, 2017 ceremony.

Slatington, established in 1864, is the Blackboard Capital of America.

The National Fire Protection Association (NFPA) has been the official sponsor of the Fire Prevention Week since 1922, when the commemoration began.
President Calvin Coolidge proclaimed the first National Fire Prevention Week on October 4-10, 1925, beginning a tradition of the President of the United States signing a proclamation recognizing the occasion. It is observed on the Sunday through Saturday period in which October 9 falls, in commemoration of the Great Chicago Fire, which began October 8, 1871, and did most of its damage October 9.