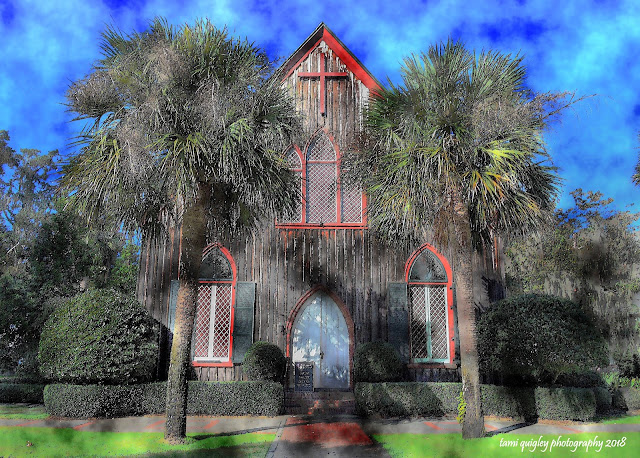 The Church of the Cross is bathed in morning glory on a beautiful late October day on the bluff at the end of Calhoun Street in Old Town Bluffton in the Lowcountry of South Carolina.

The historic church pre-dates the Civil War, or the War Between the States.

Formal worship in the Bluffton area traces its roots to the establishment in 1767 of St. Luke’s Parish, where a church was built near Pritchardville in 1787. Services on “The Bluff” of the May River first took place in the early 1830s. The young town of Bluffton was a summer resort for area and inland planters and a stop on the ferry route between Savannah and Beaufort. By 1842, a chapel was built near the current location of The Church of the Cross.

In July of 1854, construction of the present building began. Architect E. B. White designed a structure described then as a “handsome cruciform Gothic building,” which indeed it remains today. Fanned arches with a look of palmettos top its mullioned windows that are framed by latticed shutters. The builders sent to England for the rose-colored glass in the windows. Inside, soft-pink scored plaster enhances the warm light. Exposed pine timbers evoke power and stability.

In 1863, Federal troops marched into Bluffton during the Civil War, burning most of the town. Although the church was spared, its congregation fled. Services on The Bluff resumed in 1870, when the Rev. E. E. Bellinger arrived and oversaw repairs.

The National Register of Historic Places has listed The Church of the Cross since 1975. The church celebrated its 150th anniversary in 2004.

The Church of the Cross has seen much during the century and a half plus it has graced the May River bluff. It is part of the Diocese of South Carolina and the Anglican Church in North America.

Calhoun Street is named for John Calhoun, (1782-1850), an American statesman and political theorist from South Carolina and the seventh Vice President of the United States from 1825-1832. His beliefs and warnings heavily influenced the South’s secession from the Union in 1860-1861.
at November 11, 2018 No comments: