The Corn Crib In Winter ... 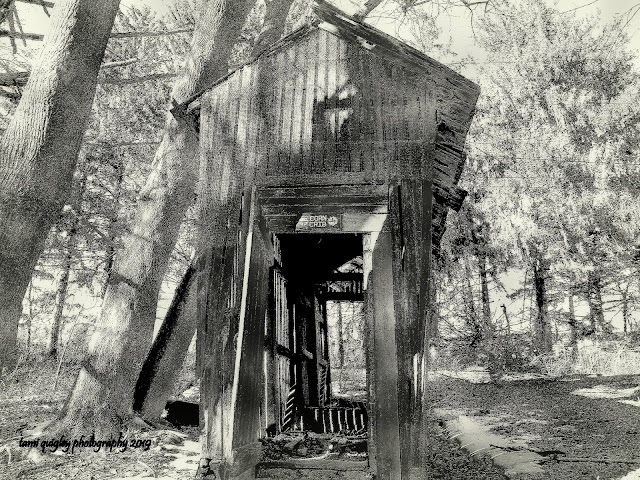 “I love the nostalgic myself. I hope we never lose some of the things of the past.”
~ Walt Disney
~1901-1966
I captured this high contrast monochrome shot of an old-fashioned corn crib on a mid-February afternoon in Whitehall Parkway, just off the Ironton Rail Trail.

Splashes of winter sunshine and a scattering of snow framed the corn crib, a type of granary used to dry and store corn.

This one has two small Pennsylvania Dutch hex signs on either side of its name. Hex signs are a form of Pennsylvania Dutch folk art, related to fraktur, found in the Fancy Dutch tradition in Pennsylvania Dutch Country. Barn paintings, usually in the form of “stars in circles,” began to appear on the landscape in the early 19th century, and became widespread decades later when commercial ready-mixed paint became readily available. By the 1950s commercialized hex signs, aimed at the tourist market, became popular and these often include stars, compass roses, stylized birds known as distelfinks, hearts, tulips or a tree of life.


The Pennsylvania Dutch are a cultural group formed by early German-speaking immigrants to Pennsylvania and their descendants. The word “Dutch” does not refer to Dutch people or language, but to the German settlers known as Deutsch in standard German and Deitsch in the principal dialect they spoke, Palatine German.

After the harvest and while still on the cob, corn is placed in the crib either with or without the husk. The typical corn crib has slats in its walls to allow air to circulate through the corn, both allowing it to dry initially and helping it stay dry. The slats expose the corn to pests, so corn cribs are elevated beyond the reach of rodents.

Corn cribs were first used by Native Americans and were quickly adopted by European settlers. Struggling European settlers often raided corn cribs for food. As a result, at least some Native groups abandoned the corn crib and buried food in caches.

Corn crib designs vary greatly. They were originally made of wood, but other materials such as concrete have also been used. The basic corn crib consists of a roofed bin elevated on posts. Another typical early American design has walls slanted outward. Most of the larger designs have an open space in the middle for accessing corn and promoting airflow. In larger designs, this space was often used to store wagons. By the early 20th century, the term “corn crib” was applied to large barns that contained many individual bins of corn. Today a typical corn crib on many farms is a cylindrical cage of galvanized wire fencing covered by a metal roof formed of corrugated galvanized iron.