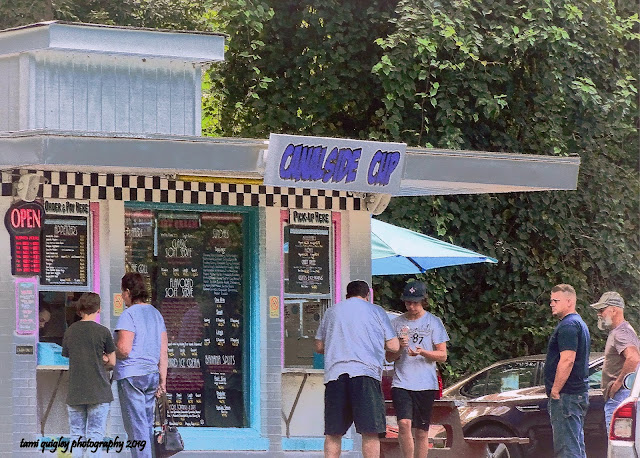 “I can’t imagine there has ever been a more gratifying time or place to be alive than America in the 1950s. No country had ever known such prosperity.”
~ Bill Bryson
~ American-British author
~ born 1951
People line up for a taste of summer –with a cup of retro on the side – in the waning days of August at the Canalside Cup in Williams Township, Easton, Pennsylvania, along the Delaware and Lehigh National Heritage Corridor (D&L Trail).

The Canalside Cup serves up ice cream, funnel cake fries, burgers, hot dogs and the like with a retro vibe, as 1950s music plays over speakers outside where shaded picnic tables beckon patrons to soak up the scenic view while they nosh.

I captured this image after starting out from the Theodore Roosevelt Recreation Area Trailhead at Delaware Canal State Park, Raubsville. After walking I grabbed a bite at the Canalside Cup for the first time and it was great. I also enjoyed eating outside as strains of “Earth Angel” and other ‘50s hits wafted through the air. My only complaint is I didn’t hear any Elvis Presley tunes during my visit, maybe next time!

Running from Wilkes-Barre to Bristol, the D&L Trail passes through the Lehigh and Delaware rivers and their canals in Pennsylvania.
at August 28, 2019 No comments: