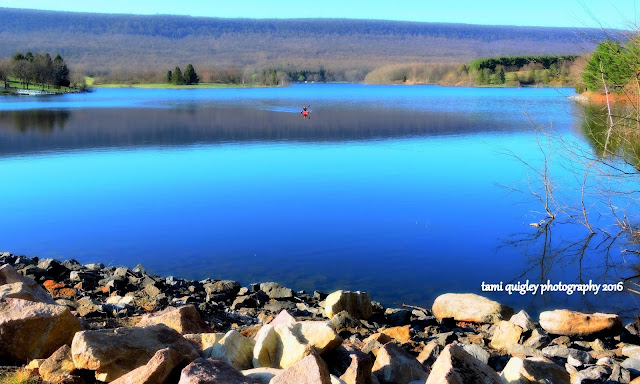 A man paddles his canoe amidst the vast beauty of early spring on Leaser Lake, in the shadow of the northern Blue Mountain Ridge, New Tripoli, Pennsylvania.

Spring is the time of new beginnings, and boundless possibilities lie ahead as he charts his course while a late March sunset waits in the wings.

I shot this scene on the day before Easter, and the nearby church bells were chiming “I Love to Tell the Story,” the wonderful Gospel hymn written as a poem by English evangelist Katherine Hankey in 1866. It was set to music by William G. Fischer in 1869. The refrain, always appropriate but especially at Easter, is, “I love to tell the story, ‘twill be my theme in glory, To tell the old, old story of Jesus and his love.” It was wonderful to hear that as I walked the trail looping around the lake on this warm evening.

Leaser Lake was built by the Pennsylvania Fish and Boat Commission for water-oriented recreation and opened for public use in 1971. Lehigh County leases this area from the state and operates and maintains the park. The land north of the lake was purchased by the county in the early 1970s. It is entirely wooded and is used for nature study and as an addition to the State Game Lands No. 217.
at April 03, 2017 No comments: