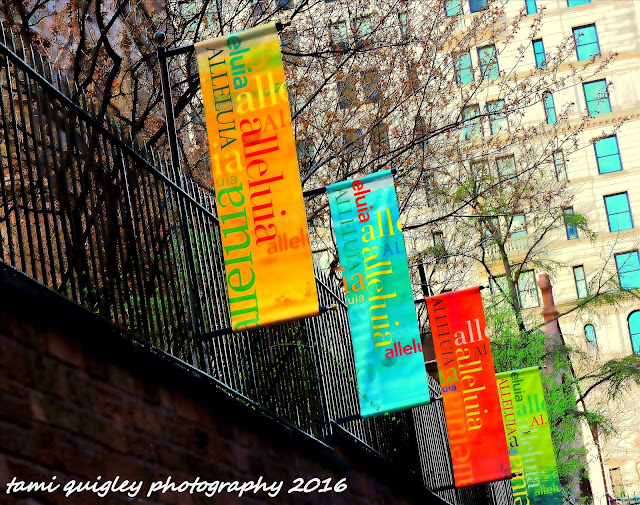 It's a touchstone of faith in the city as banners
joyfully wave a colorful chorus of Alleluias outside Trinity Church at the corner of Broadway
and Wall Street in New York City in April.

The Episcopal parish in Lower Manhattan
was a refuge for relief workers after the terrorist
attacks of September 11, 2001. A sculpture
in front of the church was made out of a giant
sycamore tree destroyed on 9/11.
at April 28, 2016 No comments: 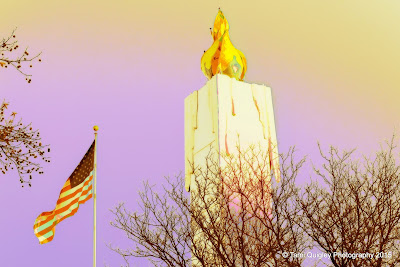 "It's better to light just one little candle

Than to stumble in the dark

Better far that you light just one little candle

All you need's a tiny spark.

The wonderful dawn on the new day we'll see

And if everyone lit just one little candle

What a bright world this would be ..."

& the theme song of  "The Christophers,"

whose motto is, "It's better to light

one candle than to curse the darkness."

An artistic view of the Easton Peace Candle as
sunset touches twilight over the Pennsylvania city's Centre Square, and Old Glory proudly waves in the November wind.


The Easton Peace Candle is a tower-like structure erected every Christmas season in Easton, Pennsylvania. The approximately 106-foot tall structure, which resembles a giant candle, is assembled every year over the Soldier’s & Sailor’s Monument, a Civil War memorial in Centre Square. It is typically assembled in mid-November and lighted over Thanksgiving weekend and disassembled in early February each year.

The Peace Candle was first erected in 1951, and has been erected almost every year since then, having been replaced a few times due to damage or disrepair. It is dedicated to the Easton area men and women who have served or are serving in the United States armed forces.

It has been said to be the largest non-wax Christmas candle in the country. Although conceived with the hopes of restoring Easton’s pre-20th century reputation for elaborate Christmas decorations, city officials also believed a candle would serve as a symbol of peace for all religions and denominations.