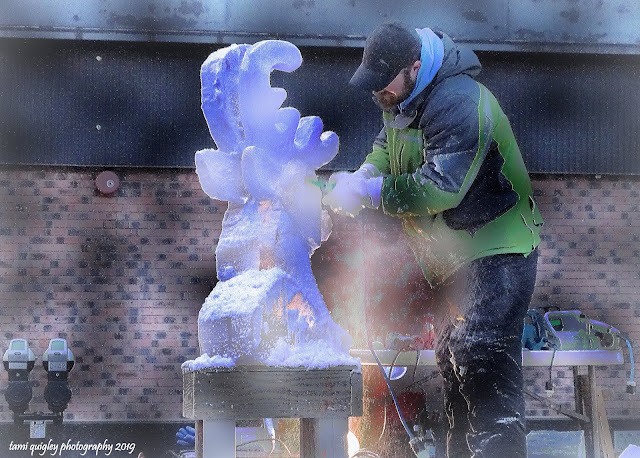 Let the Christmas season begin! The Iceman Cometh to Centre Square as an ice carver crafts a reindeer as part of the festivities leading up to the lighting of The Easton Peace Candle November 30, 2019 in Easton, Pennsylvania.

The Easton Peace Candle is a tower-like structure erected every Christmas season in Easton. The approximately 106-foot tall structure, which resembles a giant candle, is assembled every year over the Soldier’s & Sailor’s Monument, a Civil War memorial in Centre Square. It is typically assembled in mid-November and lighted over Thanksgiving weekend and disassembled in early February each year.

The Peace Candle was first erected in 1951, and has been erected almost every year since then, having been replaced a few times due to damage or disrepair. It is dedicated to the Easton area men and women who have served or are serving in the United States armed forces.

It has been said to be the largest non-wax Christmas candle in the country. Although conceived with the hopes of restoring Easton’s pre-20th century reputation for elaborate Christmas decorations, city officials also believed a candle would serve as a symbol of peace for all religions and denominations.

The daylong festivities leading up to the evening lighting also included strolling street performers, ice carvers, pictures with Santa, a petting zoo, pony rides, moon bounce, gingerbread houses on display and an array of crafts and yummy treats for available for purchase. The SwingTime Dolls, an all-female vocal group consisting of three of the area’s most accomplished vocalists that shine a new light on the tunes of the American Hit Parade of the 1940s and beyond, also performed, drawing on inspiration from The Andrews Sisters.