The Barn At Jacobsburg ... 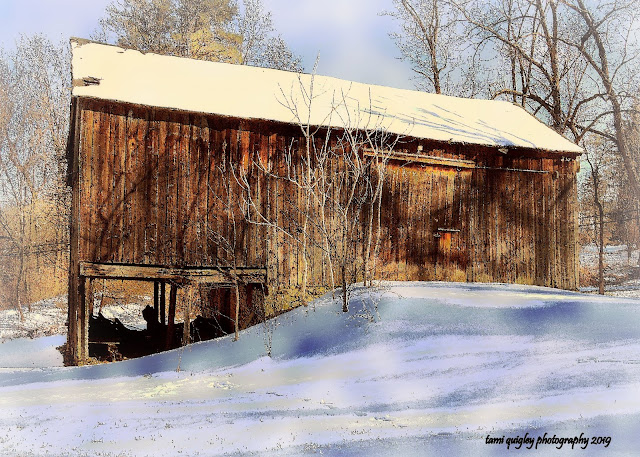 “How many lessons of faith and beauty we should lose if there were no winter in our year!”
~ Thomas Wentworth Higginson
~1823-1911
~ from “April Days”
~ 1861
A barn nestled in mid-March snow paints a picturesque late winter scene in Henry’s Woods at Jacobsburg State Park, which spans between Wind Gap and Nazareth, Pennsylvania.

The barn is part of Boulton, an early American industrial community in the heart of the Jacobsburg National Historic District – once the site where the famous Henry Rifle was made – which lies almost entirely in the park. Henry’s Woods offers very scenic hikes and the rest of the center grounds have multi-use trails.

The barn was built by William Henry III circa 1821 to house grain and livestock.

The park surrounds the Bushkill Creek.

The original land for the center was purchased by the Department of Forests and Waters from the City of Easton in 1959. In 1969, additional land was purchased using funds from Project 70. This brought the total land area of the center to its present size of 1,168 acres.

For more information on the Henry family visit the Jacobsburg Historical Society’s website at http://www.jacobsburghistory.com/.
at December 12, 2019 No comments: