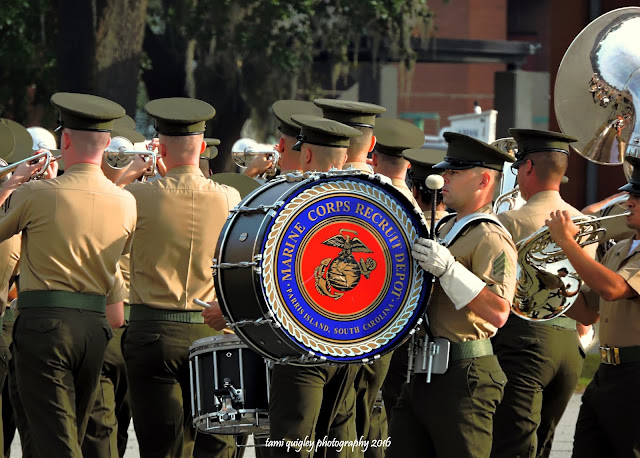 “Some people live their whole lives and wonder if they made a difference. Marines don’t have that problem.”
~ Ronald Reagan
~ 1911-2004
~ 40th President of the United States of America
~ 1981-1989
An image from the United States Marines Graduation Ceremony of Delta Company at Marine Corps Recruit Depot (MCRD) Parris Island, South Carolina on the morning of October 28, 2016. Members of the band can be seen reflected in the tuba.

It was a stirring sight to see the ceremony
graduating Marines who will serve and defend the United States of America. Semper Fi!

Marine Corps Recruit Depot Parris Island is an 8,095-acre military installation located within Port Royal, South Carolina, approximately five miles south of Beaufort, the community that is typically associated with the installation. Parris Island is used for the training of enlisted Marines. But this slice of paradise is nothing like the neighboring resorts of Kiawah or Hilton Head Island.

This is Marine Corps Recruit Depot Parris Island, where Marines are made.

Each year, 20,000 young men and women come to the base to endure one of the most rigorous and challenging military training programs in the world. It is a methodical and time-tested 12-week process with one single purpose — to create a hardened Marine prepared for combat.

Made famous in the Stanley Kubrick film “Full Metal Jacket,” Parris Island has become an iconic symbol of America’s elite fighting force. Tens of thousands of people visit the base annually, lured by the mystique of the legendary Leatherneck.


Although access is limited, the public is welcome to take a self-guided tour of the 3,000-acre training center, play golf on the Legends of Parris Island, watch recruits train in non-restricted areas and visit the Parris Island Museum.

But it’s the Friday graduations — held 40 of 52 weeks each year — that draw most visitors to the island. Family and friends of graduating Marines are extended a special invitation to attend the formal ceremony and parade and participate in Family Day, held the Thursday before graduation.

Semper Fidelis is a Latin phrase that means “always faithful” or “always loyal.” It is the motto of the United States Marine Corps, always in upper case and usually shortened to Semper Fi.
at May 23, 2018 No comments: