The Grist Mill In Summer ... 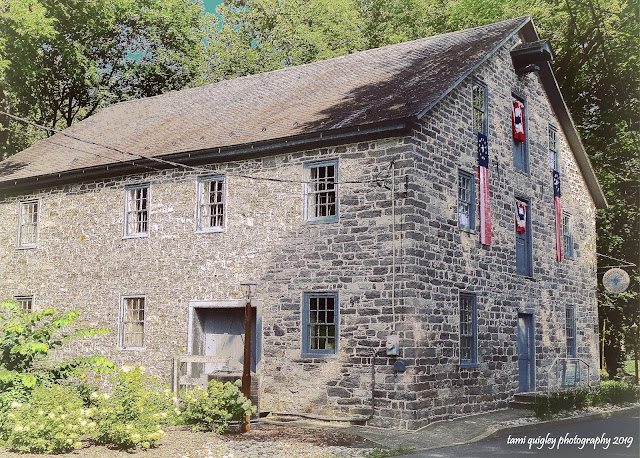 The historic Helfrich Springs Grist Mill is patriotically festooned with The Cowpen’s flag and American flag bunting on a beautiful summer afternoon in late July.

Peter Grim built this substantial stone structure in 1807. A waterwheel powered by spring water turned massive burrstones used to process grain into flour and feed grown on local farms. Grim resided in the brick home at the northwest corner of Mickley Road. Reuben Helfrich purchased the mill in 1872 since then named Helfrich Springs Grist Mill. Milling ceased about 1930.

The mill is located at Whitehall Township, Pennsylvania along the Jordan Creek. It is a three-story fieldstone mill and measures approximately 30 feet wide and 58 feet deep and has a slate roof. The Township of Whitehall acquired the property by eminent domain in 1963. The building is owned and operated by the Whitehall Historical Preservation Society, who began restoring it in 1984.

It was added to the National Register of Historic Places in 1977. A boundary increase in 1999 added the Peter Grim House.

The Cowpens flag, or 3rd Maryland flag, is an early version of the United States flag that meets the congressional requirements of the Flag Resolution of 1777. Like the Betsy Ross flag, the white stars are arranged in a circle on the blue field; but the circle consists of just 12 stars, with the 13th star in the center.
at July 29, 2019 No comments: