There Will Be No Forgetting ... 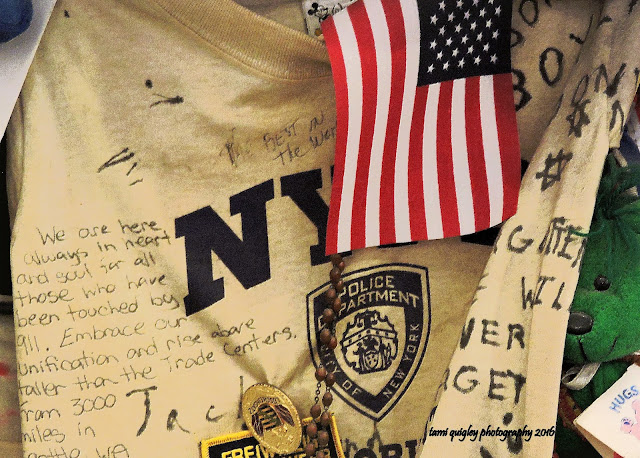 An American flag, rosary, NYPD shirt adorned with messages of remembrance, a green teddy bear and a card bearing hugs are among the items on the Memorial Altar for 9/11 Remembrance in St. Paul’s Chapel of Trinity Church Wall Street, New York City.

Someone from 3,000 miles away in Seattle, Washington, penned the message, at left, “We are here always in heart and soul for all those who have been touched by 911. Embrace our unification and rise above taller than the Trade Centers.” What a beautiful and poignant message.

Most of the 2,977 who perished on that surreal and devastating day were civilians – as well as 343 firefighters and 71 law enforcement officers who died in the World Trade Center and on the ground in New York City, and another law enforcement officer who died when United Airlines Flight 93 crashed into a field near Shanksville, Pennsylvania. Fifty-five military personnel died at the Pentagon in Arlington County, Virginia. A total of 2,606 died in the World Trade Center and in the surrounding area. The attacks were the deadliest terrorist act in world history, and the most devastating attack on United States soil since the attack on Pearl Harbor on December 7, 1941.

The Episcopal parish at the corner of Broadway and Wall Street was a refuge for relief workers after the terrorist attacks of September 11, 2001. A sculpture in front of the church was made out of a giant sycamore tree destroyed on 9/11.

I shot this on a beautiful spring day in mid-April in Lower Manhattan. 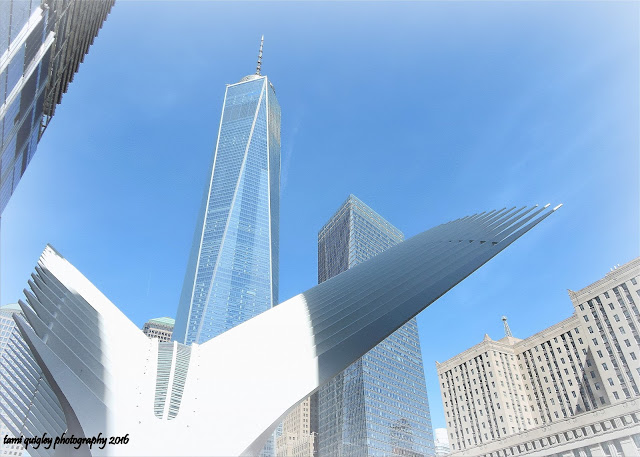 The Oculus sculpture – bringing to mind the bold, rising wings of freedom – is the creation of Spanish architect Santiago Calatrava.
at May 09, 2018 No comments: