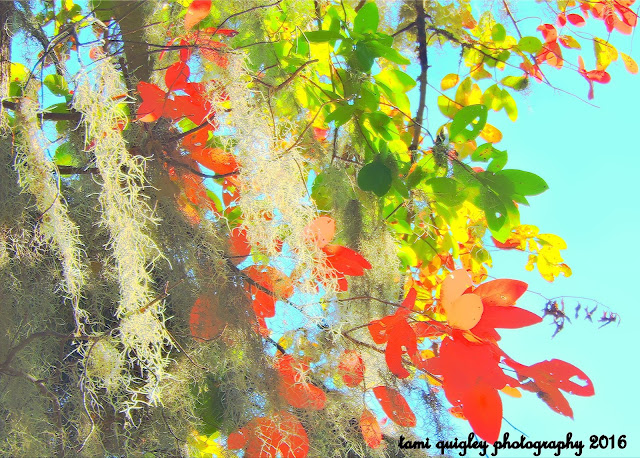 “I was born and raised on a Carolina sea island and I carried the sunshine of the low-country, inked in dark gold, on my back and shoulders.”
~ Pat Conroy
~ 1945-2016
Autumn’s colors dance with Spanish Moss in the Dixieland breeze on a sunlit October day in the Lowcountry of Beaufort County, South Carolina.

The Legend of the Spanish Moss
The story says that Gorez Goz, a bearded Spanish villain, journeyed to our shores and spied a beautiful Indian maid. He bought her for a yard of braid and a little bar of soap.

The Indian maid was so afraid of this bearded beast that she fled cover over the hill and glade with him in pursuit. Tiring, she climbed to the top of a tree, with the Spaniard close behind. She dove from the tree to the stream below. The villian’s beard and whiskers became entangled in the branches holding him back while she got away.

Gorez Goz’s life was at a loss, but his beard lives on as dangling Spanish Moss!
at November 03, 2016 No comments: