Get With The Program ... 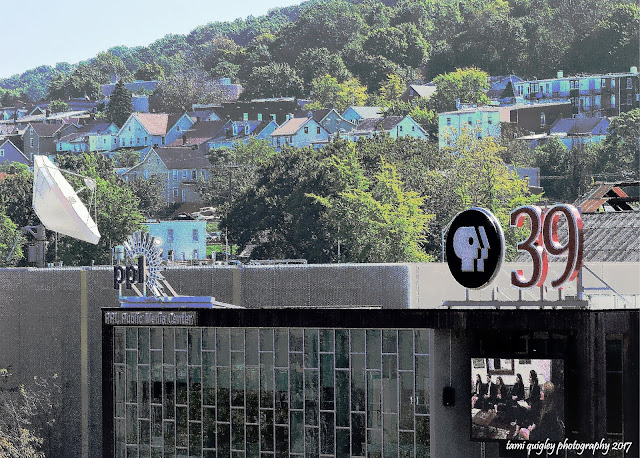 “When I was a boy and I would see scary things in the news, my mother would say to me, ‘Look for the helpers. You will always find people who are helping.’”
~ Fred Rogers
~ 1928-2003
I captured this shot of the home of WLVT-TV PBS Channel 39, Bethlehem, Pennsylvania from the walkway on the Hoover-Mason Trestle in the early afternoon of a late September day, just after summer segued into autumn but summer was still in the air.

The studios are housed in the PPL Public Media Center.

WLVT first signed on the air September 7, 1965, before I was even born, as a member of National Educational Television (NET) and eventually joined the Public Broadcasting Service (PBS) at its inception in 1970. It is commonly known as PBS39.

Oh, the childhood memories I have of watching WLVT’s’s offerings such as Sesame Street and Mr. Rogers’ Neighborhood – my favorite was always when the trolley whisked us from the neighborhood to “The Land of Make Believe!” To a lesser extent, I liked The Electric Company, Hodgepodge Lodge, The New Zoo Revue and ZOOM.

The Hoover-Mason Trestle at SteelStacks – part of Artsquest – in SouthSide Bethlehem was an elevated rail line built to transport raw materials to the blast furnace of the iconic Bethlehem Steel. It was named after the engineering firm that designed and built it. The trestle was in use from 1907-1995.

SteelStacks is a 10-acre campus with indoor and outdoor venues, hosting festivals, concerts and community events.

ArtsQuest is a nonprofit organization providing access to art, culture and educational programs.
at July 15, 2019 No comments: