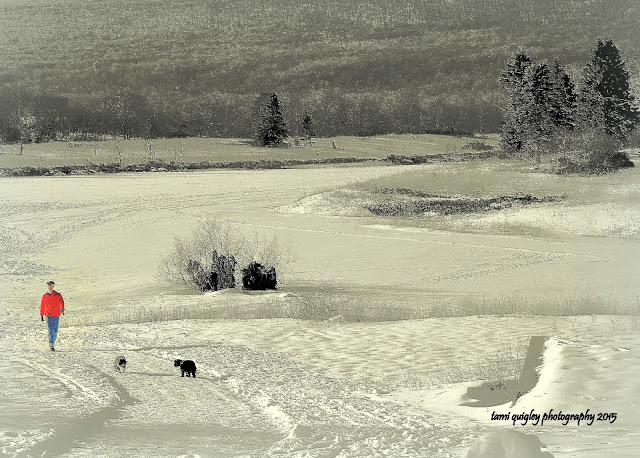 “Despite all I have seen and experienced, I still get the same simple thrill out of glimpsing a tiny patch of snow.”
~ Edmund Hillary
~1919-2008
~ New Zealand mountaineer, explorer and philanthropist who, on May 29, 1953 with Nepalese Sherpa mountaineer Tenzing Norgay, became the first climbers confirmed to have reached the summit of Mount Everest.

In the shadow of the northern Blue Mountain Ridge, a frosted, frozen and snow covered Leaser Lake glistens with winter’s artistry as a man walks his dogs across the frozen water on a sunny February afternoon in New Tripoli, Pennsylvania in this selective color shot.

Leaser Lake was built by the Pennsylvania Fish and Boat Commission for water-oriented recreation and opened for public use in 1971. Lehigh County leases this area from the state and operates and maintains the park. The land north of the lake was purchased by the county in the early 1970s. It is entirely wooded and is used for nature study and as an addition to the State Game Lands No. 217.
at December 26, 2019 No comments: