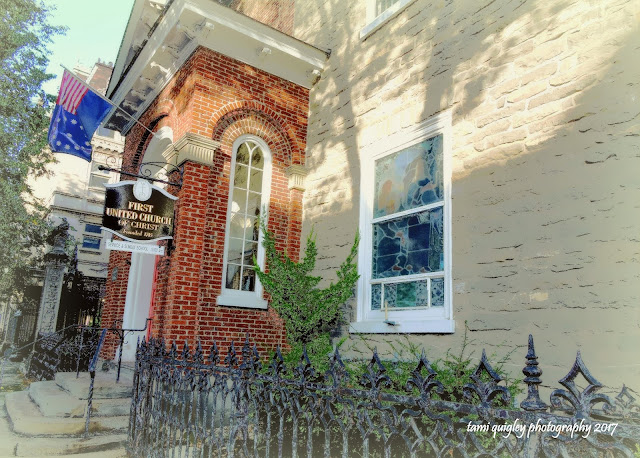 “I believe in an America where religious liberty is so indivisible that an act against one church is treated as an act against all.”
~ John Fitzgerald Kennedy
~ 1917-1963
~ 35th President of the United States of America
~ 1960-1963
& U.S. Navy veteran
~Address to the greater
Houston Ministerial Association
~  Sept 12, 1960
The historic First United Church of Christ of Easton stands as a beacon of faith in downtown Easton, Pennsylvania along the Karl Stirner Arts Trail on a beautiful late October afternoon.

The German Reformed Church was originally constructed at Third and Church Streets in 1775-1776 and was the largest building in Easton at the time. The church congregation’s office building, on Church and Sitgreaves Streets, dates from 1778, and was originally Easton’s second school building. The church served as a Revolutionary War hospital, treating wounded soldiers from the Battles at Brooklyn and Brandywine. It was during this time that George Washington came to the church to visit the wounded. The church was also the site of the Indian Treaty Conference in 1777.

The brick portions were designed by Thomas Ustick Walter, who was the architect of the dome of the United States Capitol and later served as President of the American Institute of Architects from 1876-1887. Known today as the First United Church of Christ of Easton, it stands as the oldest existing church building in the city.

The church has a Star of David in honor of Meyer Hart, Easton’s first Jewish citizen and a contributor to the original church building fund.

The Karl Stirner Arts Trail follows the historic and bucolic Bushkill Creek for 1.75 miles. Though the placement of artwork in a transcendent natural setting, the Arts Trail seeks to stir the public imagination and sense of possibility.

The trail is named for Easton sculptor Karl Stirner, who spent 25 years as a mentor and unofficial real estate agent, ushering aspiring artists to Easton.
at September 26, 2018 No comments:

On The Arts Trail 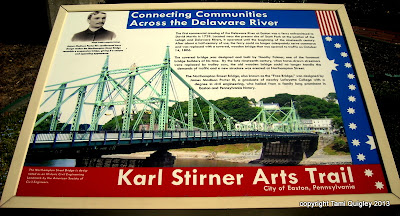 The Karl Stirner Arts Trail connects communities across the Delaware River from Easton, Pennsylvania to Phillipsburg, N.J. Beautiful spot for walking and photos!
at April 06, 2013 No comments: