The Bridge That Carried You Over ... 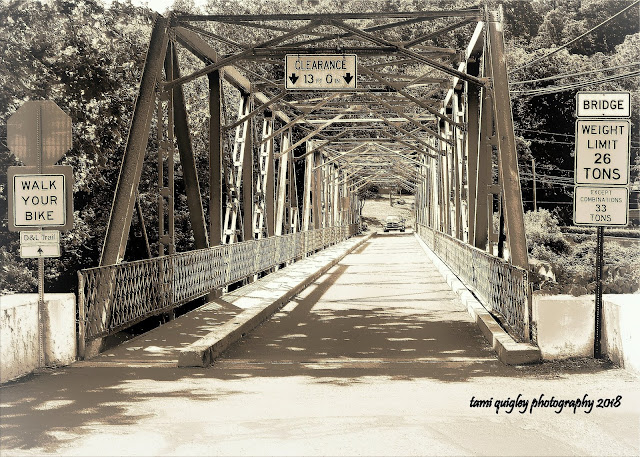 “Praise the bridge that carried you over.”
~ George Colman
~ 1762-1836
A car begins to cross the Glendon Hill Road River Bridge, Easton, Pennsylvania, which carries it over the Lehigh River on a bright and beautiful late spring afternoon that feels like a bridge to summer in this high contrast monochrome shot I captured in early June.

Built circa 1935 and rehabilitated in 2012, this three-span, 357 foot long, riveted steel Pratt through truss bridge carries one lane of traffic and a sidewalk over the Lehigh River and is one of the entrances to Hugh Moore Park, site of a trailhead of the Delaware and Lehigh National Heritage Corridor (D&L Trail.)

Hugh Moore Park is a City of Easton park, located between the Lehigh River and the Lehigh Canal. The park was once home to the first industrial park in the United States and is now home to the National Canal Museum, Josiah White II canal boat, and Delaware and Lehigh National Heritage Corridor offices.

Glendon was originally formed as a part of Williams Township, and was incorporated as a borough December 18, 1867.
at June 14, 2018 No comments: