Strolling On The Bridge ...

“It is the sweet, simple things in life which are the real ones after all.”
~ Laura Ingalls Wilder
~ 1867-1957
A couple begins a stroll across The Riegelsville Toll-Supported Bridge (Riegelsville Roebling Bridge) on a beautiful August day in Riegelsville, Pennsylvania, a sweet and simple way for people in love to spend a summer afternoon.

Spanning the Delaware River, the bridge connects the Borough of Riegelsville in Pennsylvania with Pohatcong Township in New Jersey.

The original bridge, a covered wooden structure, was constructed in 1835. It remained in service until the entire superstructure was swept away by the flood of October 10, 1903.

The existing bridge, constructed in 1904 by John A. Roebling’s Sons Company of New York, is a three-span suspension structure with a total length of 577 feet. The open-grid steel deck provides a roadway width of 16 feet between steel rubrails. A timber-plank sidewalk is supported by a king post floor beam system, cantilevered on both ends of the bridge. The sidewalk railing is actually a double-warren truss, assisting in strengthening the bridge roadway.

The substructure, masonry piers originally built in 1835, were raised and built up in 1904. The pier nearest the Pennsylvania approach was almost completely demolished in the flood of 1936 and was subsequently rebuilt using reinforced concrete.

The bridge was rehabilitated in 2010 and dedicated in 2011. It is owned by the Delaware River Joint Toll Bridge Commission, and is currently posted for a three-ton weight limit and a 15 MPH speed limit.

Riegelsville is a Route 611 river town along the Delaware and Lehigh National Heritage Corridor (D&L Trail). The trail is positioned between the Delaware River and Delaware Canal, which was designated a National Historic Landmark in 1978. The site possesses national significance in commemorating the history of the United States of America.

Running from Wilkes-Barre to Bristol, the D&L Trail passes through the Lehigh and Delaware rivers and their canals in Pennsylvania.
at September 11, 2019 No comments: 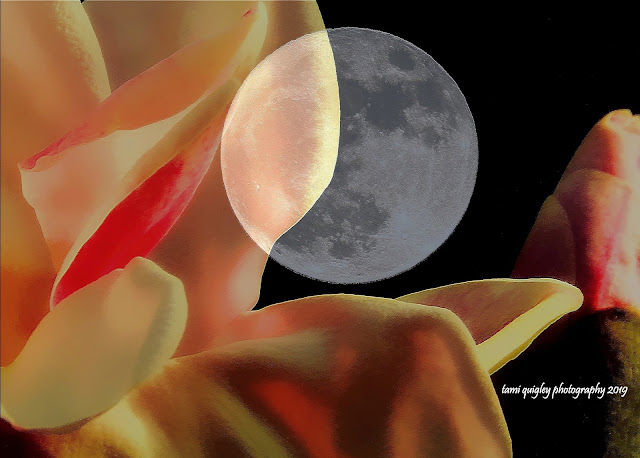 Moonlight and magnolia refers to the romanticization of the pre-Civil War South.

“You can drop the moonlight and magnolia, Scarlett! So things have been going well at Tara, have they?” Rhett asks Scarlett in my favorite movie of all time. When Scarlett wore a dress made of green velvet drapes to Atlanta to try and get money from Rhett to pay taxes on her home, Tara, she smiled sweetly and claimed to have everything she could hope for, and “not a care in the world.” Rhett noticed her hands, calloused from picking cotton, and knew she was lying.

I created this image by blending “In The Fire of Spring,” – a shot I took of a beautiful blossom and breaking bud in tandem in the fire of spring as sun set on my favorite magnolia tree at Trexler Memorial Park, Allentown, Pennsylvania in April 2015 – with my capture of the Supermoon over Cedar Creek Parkway, Allentown, Pennsylvania on December 3, 2017.