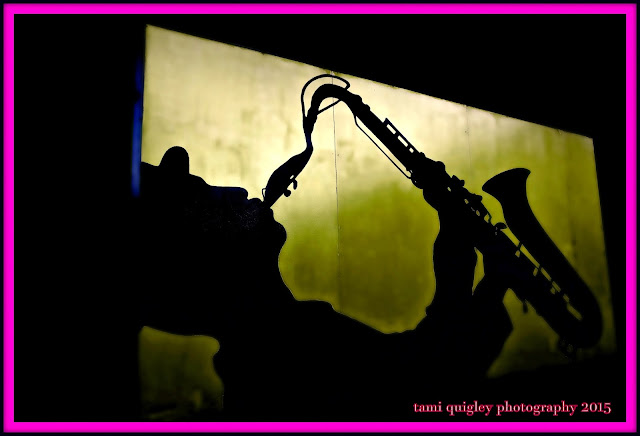 "It don't mean a thing if it ain't got that swing."
~ Duke Ellington

Can you hear the cool jazz floating from this saxaphone, swingin' through the hot air of a sweet summer night? That's the image that popped  into my mind when I shot this portion of a jazzy  mural in Easton, Pennsylvania on a chilly November day. This is my artistic interpretation of the mural image.


I captured this cool mural of jazz silhouettes of musicians on the façade of the Hotel Lafayette as they literally paint the town. The mural features the shadows of musicians on keyboard, saxophone, trumpet and other jazz instruments against bright colors.

The mural is an Easton Main Street Initiative public art project created in 2012. It is a gift of the Easton Rotary Service Foundation in memory of Ted Pierce, who was the station manager of WEST radio, an outstanding and devoted citizen. He was a generous benefactor of the Easton community and Easton Rotary Service Foundation, as well as an exemplary journalist and key reporter on the Nuremburg War Crimes Trial for the Armed Forces Network. Pierce left a large amount of money for the Rotary Club to use on Easton-based projects.

The mural was designed and painted on the Fourth Street side of the building by the Freehand Mural Group of Easton.