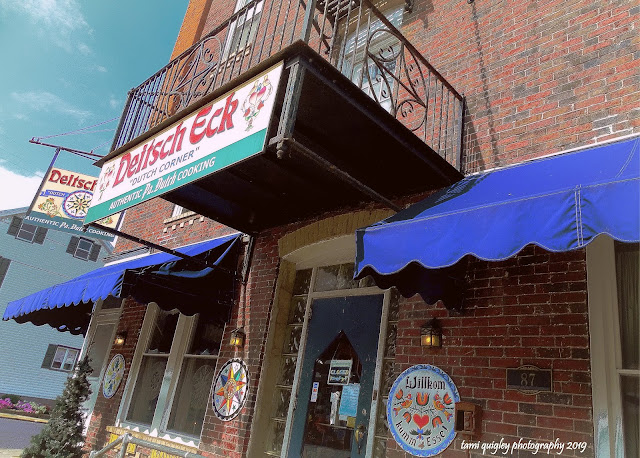 “Kumme esse”
~ Pennsylvania Dutch phrase for “Come eat”
The Deitsch Eck (Dutch Corner) Restaurant basks in the early autumn sun on a late September afternoon on the corner of Old Route 22 and Route 143 in Lenhartsville, Pennsylvania

The restaurant doesn’t open until 4 p.m., except for Sundays, and when I stopped by on a Saturday afternoon it was an hour until opening, next time I’ll plan to be there when I can stop in!

Originally known as the Washington Hotel when built in the late 1700s, the inn was destroyed by fire sometime in 1914. The late well-known hex sign painter, Johnny Ott, bought the building in the late 1930s and ran it as a country bar, restaurant, and hotel. Many times he could be found there in an enclosed side porch studio where he painted his hex signs, furniture, anything he could pretty much get his hands on.

After Ott’s death in 1964, the Peters brothers of Lenhartsville operated the hotel until hex sign artist Donald Greth purchased it in 1966. He and his wife operated it until the middle of June, 1971, when it was purchased by Deitsch Eck Hotel and Restaurant Inc, a subsidiary of the PA Dutch Folk Culture Society (PADFCS), a nonprofit organization.

The restaurant became known simply as the Deitsch Eck (Dutch Corner). The second and third floor hotel rooms were renovated and made into apartments

In the early 1990s there were plans by the PADFCS to relocate the museum complex and artifacts to the Kutztown University Heritage Center, a place that was created to keep the memories of the PA Dutch way of life alive. The group had no intentions on continuing to operate the restaurant, and Steve Stetzler, an area resident, former employee of the Deitsch Eck, and graduate of Penn State’s Hotel, Restaurant, and Institutional Management program, was asked to manage the business. In 1997 the PADFCS sold the restaurant and apartments to Stetzler, and to this day he remains the current chef and owner.

The Pennsylvania Dutch are a cultural group formed by early German-speaking immigrants to Pennsylvania and their descendants. The work “Dutch” does not refer to Dutch people or language, but to the German settlers known as Deutsch in standard German and Deitsch in the principal dialect they spoke, Palatine German.

As I am half Irish and half Pennsylvania German, I grew up with much of these tasty offerings because my late grandmother was a wonderful baker and cook, and fastnachts, shoofly pie and angel food cake were my favorites of hers.
at October 02, 2019 No comments: