Down By The Old Mill Bridge ... 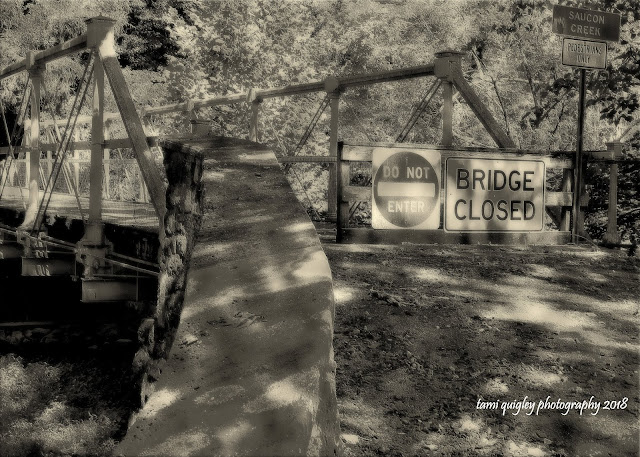 “My darling I am dreaming of the days gone by,
When you and I were sweethearts beneath the summer sky …
But still I will remember, where I first met you …
Down by the old mill stream where I first met you …
It was there I knew that you loved me true ..”
~ “Down by the Old Mill Stream”
~ written by Tell Taylor and one of the most popular songs of the early 20th century. The publisher, Forster Music Publisher, Inc. sold four million copies.
The song was written in 1908 while Taylor was sitting on the banks of the Blanchard River in northwest Ohio in the city of Findlay. Reportedly, Taylor’s friends persuaded him not to publish the song, believing it did not have commercial value. Two years later in 1910, however, the song was published and introduced to the public with the performances by the vaudeville quartet The Orpheus Comedy Four. After the group performed the song at a Woolworth store in Kansas City, it became so popular that the store sold out all one thousand copies of its sheet music Taylor had brought with him. Since then, over four million copies of its sheet music have been sold and it has become a staple for barbershop quartets.
~ recorded by artists including Arthur Clough, Harry Macdonough, Bing Crosby, The Mills Brothers and Harry James
The Old Mill Bridge is the star of this high contrast monochrome shot I captured on perfect, sun-dappled late August afternoon just off the Saucon Rail Trail, Hellertown, Pennsylvania.

The Saucon Creek streams under the bridge, constructed in 1867 and considered to be one of the earliest dated iron Pratt pony truss structures known in Pennsylvania. The bridge was rebuilt in 1948 and rededicated April 17, 2013.

The Old Mill Bridge is part of the Ehrharts Mill Historic District that appears on the National Register of Historic Places.

First developed as a mill site in the mid-18th century, the Grist Mill ground wheat from local farmers that was shipped out via the North Penn Railroad, which now serves as the Saucon Rail Trail. The mill was operated by the Ehrhart family from 1820 to 1959 and was destroyed by a fire in 1995.