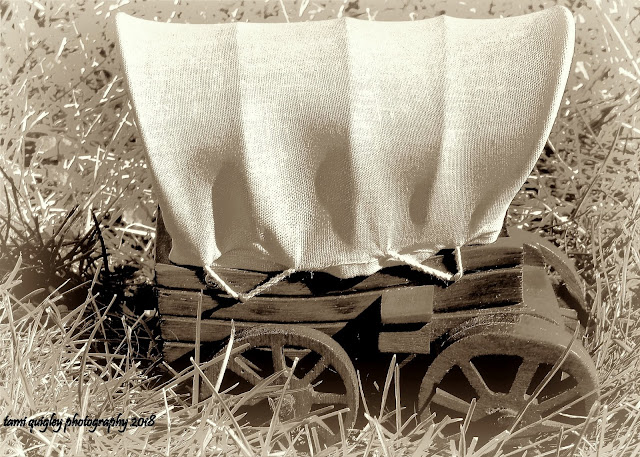 Pickin up a passenger in every town,
Wonderin’ if he’s ever gonna shoot you down.
Lookin’ for a pal, ain’t it a pity,
Looking for a gal, needn’t be pretty
If she’ll ride on the Wagon Train.

Gotta keep em on the run.
Time to go and follow the sun.
Roll along Wagon Train.

Never had a cabin near a general store,
Only had a wagon and a forty-four.
Sittin on a board, eyein’ the weather
Prayin’ to the Lord, we stay together
Side by side on the Wagon Train.”
~ Theme song from the television series “Wagon Train,” which used the instrumental version, but lyrics do exist, as sung by star Robert Horton.

My late grandfather loved Wagon Train, though I really never saw it, as the series ended before I was born, until I watched the reruns in recent years – and developed a mad crush on Robert Horton!

I thought it would be fun to take this covered wagon music box that was a gift to my grandfather out in the backyard to photograph with some artistic enhancements and sepia on a sunny summer day in late June.

The result is Wagons Ho!

Wagon Train chronicled the adventures of a wagon train as it makes its way from St. Joseph, Missouri to California and the trials and tribulations of the series regulars who conducted the train through the American West.

Episodes revolved around the stories of guest characters typically played by stars such as Bette Davis, Jane Wyman, Ronald Reagan, Lee Marvin and Joseph Cotton portraying various members of the massive wagon train or encountered by it. Episode titles routinely emphasized the guest characters with titles such as “The Willy Moran Story” and “The Echo Pass Story.”

So notable was the show that veteran film director John Ford came on board to direct a 1960 segment.

The series was inspired by the 1950 film “Wagon Master” directed by John Ford and starring Ben Johnson, Harry Carey Jr. and Ward Bond, and harkens back to the early widescreen wagon train epic “The Big Trail” (1930) starring John Wayne and featuring Ward Bond in his first major screen appearance, playing a supporting role. Robert Horton’s buckskin outfit as the scout in the first season of the television series resembles John Wayne’s, who also played the wagon train’s scout in the earlier film.
at July 09, 2018 No comments: