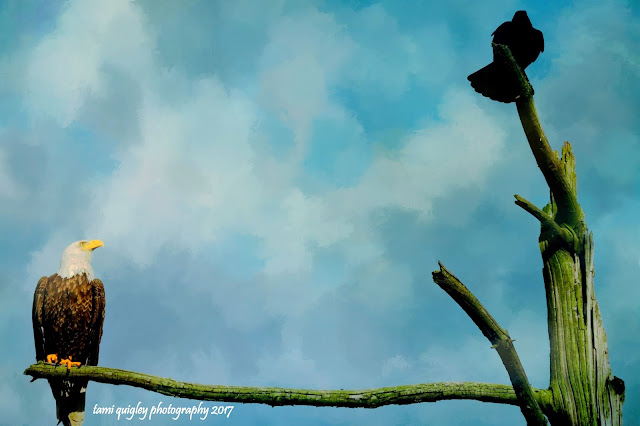 “Hey, you, get off of my cloud … and my perch!” That’s what this bald eagle’s expression seems to say as it gazes up at a very noisy crow, making it clear two’s a crowd!

It was wonderful to photographic a majestic American Bald Eagle for the first time as it was perched in the late day sunlight along the Delaware and Lehigh National Heritage Corridor (D&L Trail) at Lehigh Gap, Slatington, Pennsylvania over the Memorial Day weekend 2017.

Perched in the shadow of the Kittatinny Ridge, also called Blue Mountain, the eagle was apparently disturbed by the very loud crow nearby – and emitted a call to let the crow know! I was blessed to spend 15 minutes photographing the eagle, during which time the crow flew away.

The bald eagle is both the national bird and national animal of the United States. The bald eagle appears on our nation’s seal. In the late 20th century it was on the brink of extirpation in the contiguous United States. Populations have since recovered and the species was removed from the U.S. government’s list of endangered species on July 12, 1995 and transferred to the list of threatened species. It was removed from the List of Endangered and Threatened Wildlife in the lower 48 states on June 28, 2007.

The Lehigh Gap is a crossroads where the Lehigh Gap Nature Center’s trails connect two historic trails – the Appalachian Trail and the D&L Trail.

Background texture by Jai Johnson added for artistic effect.
at June 01, 2017 No comments: