State Of The Evening ... 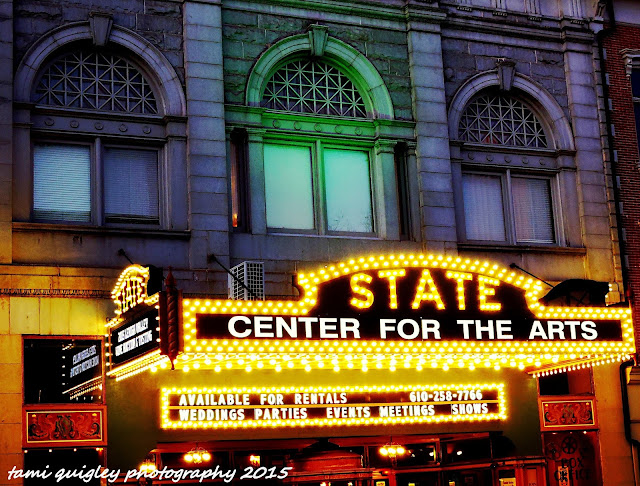 “I regard the theatre as the greatest of all art forms, the most immediate way in which a human being can share with another the sense of what it is to be a human being.”
~ Oscar Wilde
~1854-1900
The State Theatre sparkles like a jewel in downtown Easton, Pennsylvania on a chilly November evening on Northampton Street.

State Theatre, originally known as Neumeyers Vaudeville House and now the State Theatre Center for the Arts, is an historic theatre. The building began to take its present form in 1910, when modified from a bank building to a vaudeville house. The building was extensively modified in 1926, to include a larger auditorium, balcony and lush decorations. At that time it was renamed “The State.” The building is asymmetrical with a cut stone Beaux-Arts style façade and large overhanging marquee.

Beaux-Arts Architecture is a very rich, lavish and heavily ornamented classical style taught at L’Ecole des Beaux Arts in Paris in the 19th century. The term “Beaux Arts” is the approximate English equivalent of  “Fine Arts.”


State Theatre was added to the National Register of Historic Places in 1982.
at December 19, 2016 No comments: