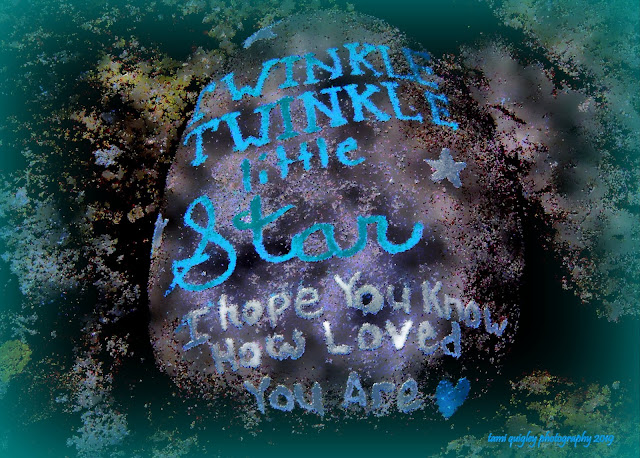 “Twinkle, twinkle, little star,
How I wonder what you are!
Up above the world so high,
Like a diamond in the sky.

When this blazing sun is gone,
When he nothing shines upon,
Then you show your little light,
Twinkle, twinkle through the night.

Then the traveller in the dark
Thanks you for your tiny spark;
He could not see where to go,
If you did not twinkle so.

In the dark blue sky you keep,
And often through my curtains peep,
For you never shut your eye
Till the sun is in the sky.

As your bright and tiny spark
Lights the traveller in the dark,
Though I know not what you are,
Twinkle, twinkle little star.”
~ “Twinkle, Twinkle, Little Star”

“Twinkle, Twinkle, Little Star” is a popular English lullaby. The lyrics are from an early 19th century English poem by Jane Taylor, “The Star.” The poem, which is in couplet form, was first published in 1806 in “Rhymes for the Nursery,” a collection of poems by Taylor and her sister Ann. It is sung to the tune of the French melody “Ah! Vous dirai-je, Maman,” which was published in 1761 and later arranged by several composers including Mozart with Twelve Variations on “Ah vous dirai-je, Maman.” The English lyrics have five stanzas, although only the first is widely known. This song is usually performed in the key of C major. The song is in the public doman, and has many adapations around the world.

I found this rock painted with the words “Twinkle Twinkle Little Star I Hope You Know How Loved You Are,” a twist on the well-known “Twinkle, Twinkle, Little Star” as it brightened a January day at Trexler Memorial Park, Allentown, Pennsylvania.

The grassroots project encourages people to leave rocks painted with inspiring messages along the path of life. People are encouraged to take one, share one or add to the pile. You can see just how much impact she’s made when looking up #TheKindnessRocksProject. Learn more about how to join the movement at http://thekindnessrocksproject.com.