Of Soldiers And Sailors ... 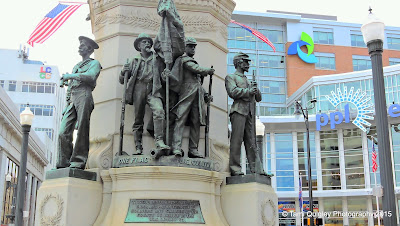 "Freedom is the last best hope of earth."

~ 16th President of the United States

Valor is celebrated as the Soldiers and Sailors Monument stands in
the heart of downtown Allentown, Pennsylvania a few days before
Veteran's Day 2015. The statue of a rebel Confederate soldier (second from left) stands
beside a Union soldier with the phrase "One Flag, One Country" imprinted beneath them.
The rebel soldier was included on the monument as a gesture of reconciliation when
it was erected in 1899, only three decades after the Civil War, or the
War Between The States.  It is reportedly the only municipal monument in the North
honoring a Confederate soldier.

An inscription reads: "This column commemorates the valor and patriotism of the
Soldiers and Sailors of the County of Lehigh in the War of 1861-65."
at November 10, 2015 No comments: