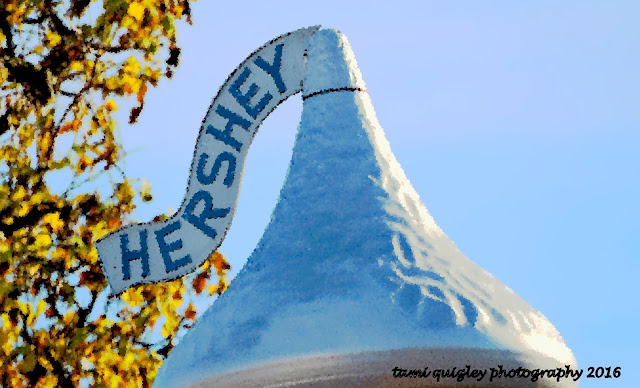 Where else in the world would street lamps be topped with candy kisses than “the sweetest place on Earth” – Hershey, Pennsylvania!

Chocolate Avenue, which runs past the original Hershey’s Chocolate Factory and is considered to be the main street of the town, is known for its street lamps that are shaped like Hershey Kisses. These unique lamps were first erected in 1963. Some of the kisses are shown as being wrapped, and some as unwrapped, alternating between these two designs. These lamps can also be found on Park Avenue.

Chocolate Avenue was one of the first two streets built in the town of Hershey by Milton Hershey (1857-1945) when he built up the town for his chocolate empire; the other was Cocoa Avenue. The name of the street was picked by Milton Hershey himself. He picked names for many streets in the town that related to chocolate.

I shot this on a recent autumn jaunt to Hershey from the passenger seat of a moving car, as there was no parking on the street. If you’re going to hang out of a car window taking pictures, what better place to do so than the sweetest place on Earth!
at November 22, 2016 No comments: