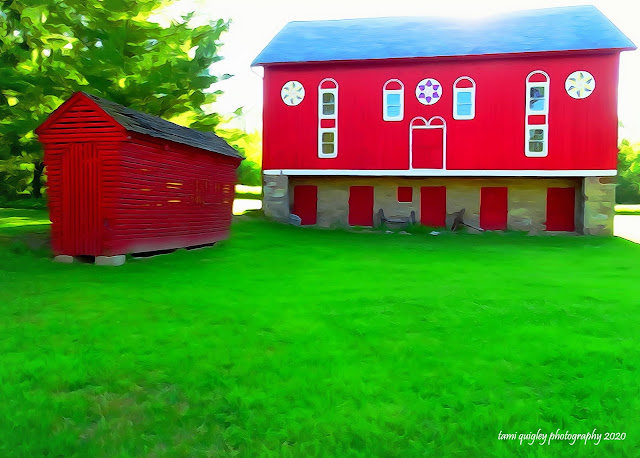 “It is not easy to walk alone in the country without musing upon something.”
~ Charles Dickens
~ 1812-1870
This picturesque 19th century barn is the cornerstone of this peaceful and painterly rural spring scene on an early June evening in Egypt, Pennsylvania.

The barn and corn crib are part of the historic 1756 Troxell-Steckel Farm Museum.

The Coplay Creek runs through this 31 acre property, which was once part of a 400 acre farm. The centerpiece of the property is a stone farmhouse, built in 1756. A spring house and the barn are also on the property. The farmhouse is an authentic Pennsylvania German farmhouse and offers an example of Lehigh County agricultural history. The Troxell-Steckel house was added to the National Register of Historic Places in 1980.

It is the region’s only authentically complete Pennsylvania German farm house, resembling its medieval ancestors and giving a captivating glimpse of the area’s farm history.

The Pennsylvania German farmhouse was constructed in 1756 by John Peter Troxell, an immigrant from Germany in search of a better life. When the structure was built, twenty years before the Declaration of Independence was signed, this farm sat on the edge of wilderness. George Washington was only 24 years old, and America was ruled by the King of England. At the time, the house was reported to be the largest residence on the Pennsylvania frontier. The fortress-like masonry walls of this structure are more than two feet thick.

In 1768, John Peter Troxell sold this farm to Peter Steckel, another immigrant from Germany. Pennsylvania Germans were one of the largest immigrant groups in Eastern Pennsylvania. Their traditions enriched American culture.

As someone of Irish-German heritage, I love getting a glimpse into Pennsylvania German history in the area.

This historic site is owned and operated by the Lehigh County Historical Society and is open for seasonal tours and events.