Taste Of An American Summer ... 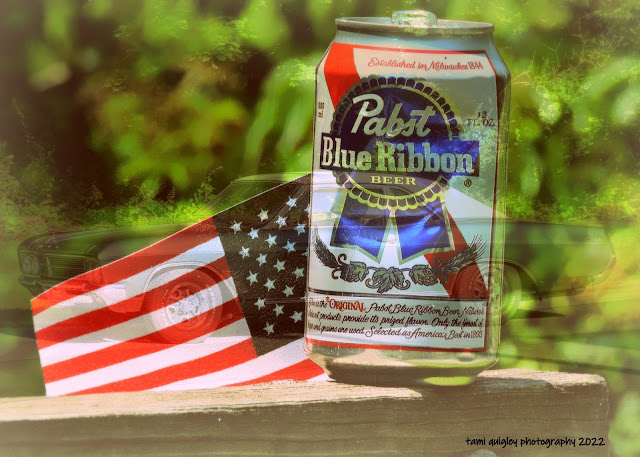 “Sure I wave the American flag. Do you know a better flag to wave? Sure I love my country with all her faults. I’m not ashamed of that, never have been, never will be.”

I created “Taste Of An American Summer” by blending two of my images in an Americana tribute to our great nation & summer, my most favorite of seasons.

I captured Old Glory billowing in the breeze on a beautiful mid-July afternoon in 2019 along the Delaware and Lehigh National Heritage Corridor (D&L Trail) that hugs the Kittatinny Ridge at Lehigh Gap, Slatington, Pennsylvania. Many flags such as this patriotically dot the trail, but this is the only time I’ve seen a Pabst Blue Ribbon beer can there ~ drinking along the trail is not encouraged, but I thought it made a cool photo. Pabst Blue Ribbon was founded in Milwaukee, Wisconsin in 1844 & selected as America’s Best in 1893. And the can’s red, white & blue theme meshes perfectly with the American Flag.

I spotted this cool Buick Skylark, which sported an Antiques Car license plate, on an early June evening in 2022 at Lehigh Parkway, Allentown, Pennsylvania. The Buick Skylark is a passenger car formerly produced by Buick. The model was made in six production runs, during 46 years, over which the car’s design varied dramatically due to changing technology, tastes, and new standards implemented over the years. It was named for the species of bird called skylark. Model years were 1953-1954, 1961-1972 and 1975-1998.

Together, these images paint an image of an American summer.

In the shadow of the Kittatinny Ridge, also called Blue Mountain, The Lehigh Gap in Slatington, Pennsylvania, is a crossroads where the Lehigh Gap Nature Center’s trails connect two historic trails – the Appalachian Trail and the D&L Trail.

I just love this quote from John Wayne ~ the great, iconic American actor known as “The Duke” ~ and thought it matched perfectly with the image, especially in these times.

I posted my new spring video on June 15, 2022. Hoagy Carmichael’s “Up a Lazy River” sets the jaunty tone to swing into spring’s splendor showcased in my original photos. My greatest joy as a photographer is harmonizing my favorite original photos to music to create a lingering snapshot of the season. Enjoy! Prints, Gifts & Décor of images available on my Fine Art America /Pixels site, http://tami-quigley.pixels.com This video may also be viewed on my You Tube channel at https://www.youtube.com/watch?v=c3nTJPGBMi4